Fires Far Away: A Solitaire Journey is a single-player conversion of the original Fires Far Away: a pen & paper homebrew developed by an anonymous poster(s?) on the 4chan /tg/ board. As of the Spring of 2021, the original rulebooks are still available at https://1d4chan.org/wiki/Fires_Far_Away.

The playtest release of the companion scenario Everloyal is now available

The player is not inundated with illustrations, explanations, or exposition. An imagination will have to paint in the whites left reserved by the scenario.

The game is designed to be stern, but not cruel. The goal is to challenge the player’s mind and rattle their playstyle, not crush their character in a random or merciless fashion.

Like the original homebrew, Fires Far Away: A Solitaire Journey eschews dice rolls as a resolution mechanic whenever possible. A small amount of randomness is present, but the game favors flat success conditions. The outcome of the character’s actions is not dependent on rolling well, but rather playing well to the rolls.

No scenario should contain any throwaway encounters or 'trash mobs'. Each encounter should be a puzzle in and of itself, pitting the character against a mortal and uniquely challenging threat.

The character will face one-shot encounters which alter the scenario depending on whether they suffered defeat, conquered adversity, or fled in the face of it.

The player is not expected to surmount every obstacle or defeat every enemy. A scenario is a story as much as it is a challenge, and every well-told tale traverses both valleys and summits.

All mechanics are based around low arithmetic, making them easily tracked via tokens, coins, pencil marks, beads, or even fingers. No need for an abacus or similar such apparatus.

Unique to Fires Far Away: A Solitaire Journey, the player is not likely to experience a scenario in any canonical order. The furtive element of randomness rears its head here; each scenario is broken into chapters that are played in order of draw.

Fires Far Away was not released under any license or copyright. Fires Far Away: A Solitaire Journey is released under the CC BY-NC-SA 3.0 US license. In other words, this is an 'open source' item. Additions and modifications are welcome as long as they're non-commercial.

And special thanks to our playtesters! 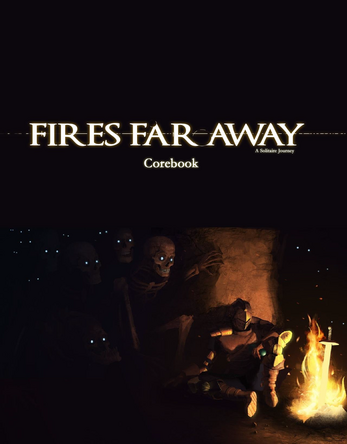 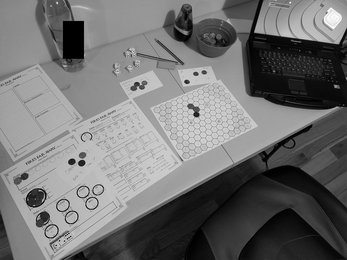